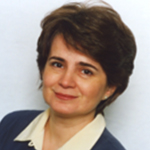 Cristina has a degree in engineering from the Technical Construction University of Bucharest. She has successfully graduated from the EMBA program witihin ASEBUSS Romania. Throughout her career, Cristina worked within engineering companies in the departments of design and development. For three consecutive years – 2005, 2006 and 2007, Cristina was nominated for the “Top 100 Successful Women in Romania” published by Capital magazine, one of the market leading business magazines. She also represented Romania in many international conventions, such as the World Bank and United Nation Economic Committee.